wabbit (the jack is silent) ( 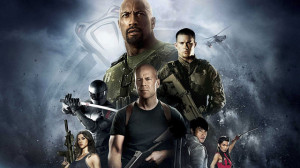 So, I finally saw this today. I say finally because while I don't see many movies in the theater anymore, I see those I care about in the theater and when I do so, I generally do so as soon as they come out because: 1-I wish to avoid spoilers. 2-I like the excitement of premieres. But life conspired against me in general this past little bit and while I adore the Joes, I wasn't dying to see this movie, so here we are two weeks or so out and I'm just now getting to it. Bottom line? B.

Overall, this movie was better than the last Joe offering. It told a better story. It really did. And it adhered to the comics canon a lot more. It cut a lot of the silly crap. But because of that, it didn't give me as many Joe fangirl nods, so in some ways it fell just a bit flat for me. So it's getting the same grade as Rise of Cobra from me. B.  But you know I can't just leave it at that. It's G.I. Joe. I'm going to talk for a while.

So, here goes. I'll try to keep it brief.

The Rock. What can I say? I love the guy. And him as Road Block was just wonderful. However, the writers seriously dropped the ball by not giving us a "Can you smell what Road Block is cooking?" line. I mean, come on. It's The Rock. And Road Block was a master chef. Give us something here. A reference. An apron hanging in the kitchen of Road Block's house, even. Something subtle would be fine. The cupcake was nice, but...more, please.

Snake-Eyes: Snake-Eyes is never not cool. And thank you for fixing his mask. It was much, much better. Thank you for not having him speak when he found out about the Hard Master, because the back story you gave for his lack of talking in the first movie was lame and you know it.

Storm Shadow: so, you DID decide to go into the actual Hard Master story line? Nicely done. Very nicely done. I didn't think you'd go there, as evidenced in my review of the first movie, but you did. I applaud you. I was a little surprised you did this so quickly, but I'm glad. I like my Arishakage boys all up close and personal, and since you gave me a back to back sword fighting scene, I'm golden. Oh, and Storm Shadow's line about "I'm not with you, I'm just not against you this time?" Yes, yes, and yes.

Firefly: Oh, yes, please. That is all. I squeed like a little girl (okay, a 37-year-old Joe fangirl) when I saw that little bug in the desert.

Killing Duke: way to stick to it. No heroic rescue, no showing up later, no flashbacks. And seriously, who cares about Duke in your universe?

Jinx: she gets into the Pro section for three reasons. Though something about her just didn't sit quite right with me and you could have seriously developed her character more, I suspect that is my Scarlett bias showing, and her points come from important things, so Pro I must go. One, the blind master. I'm impressed you put him in here, and to have Jinx's complicated history boiled down into a few lines of dialogue from him to Snake-Eyes was appreciated. Two, the line of said dialogue that alluded to Snakes not quite trusting Jinx. Ah, so for those who don't know, she isn't quite what she seems. Well done. Three, continuity. You present her as Storm Shadow's cousin and have her fight best blindfolded, which is very important to her character. I'll take it.

Flint and Lady Jaye as a couple: the very minor nod to their romance in having Flint check out Lady Jaye while she was changing clothes was nice. Done well enough to have Flint not look like a creep, and come on. Who wouldn't look? Plus, this is Flint and Lady Jaye we're talking about here. We all know their story. We don't need it thrown in our faces. And those who don't know don't care, so way to leave it be with a nod only. That you get props for.

Cobra Commander's Suit: nice upgrade. That is all.

Zartan: oh, but he's still perfect, as before. The quicker blower-upper? The waterboarding line? Most excellent. I don't know that I would have had Storm Shadow take him out so quickly, but whatever. He was fun while he lasted!

Lady Jaye herself: um...well, first off this character was Lady Jaye in name only. What's with the long hair? Why didn't she throw anything? Speak other languages? I'll give you points for her impersonating someone, though. Sort of. And did you have to give her some lame backstory to make her more interesting? Why did a man have to be her motivation? And why did a man have to validate that at the end? Ugh, ugh, ugh. Why not just, I don't know, have her be kick-ass on her own? Oh! And once again, as with Duke, you randomly make enlisted personnel officers. And once again I just let that go. Sigh.

Flint himself: he is also Flint in name only. I understand that both he and Lady Jaye are very minor characters in this story, but he could have had some meat on him surely? Why exactly was he even in the movie? And never mind that he outranks Duke, but whatever.

The lack of Scarlett: now, as a Scarlett fan, this wounds me, but I get it. Much like killing Duke, you had to rip off the Band-Aid. You were rebooting your own reboot, so to speak, by concentrating on new characters (and yes, Road Block over Heavy Duty any day of the week, please), so I get it. But...but...but...it's Scarlett. She is an absolutely seminal Joe. Ignoring Ripcord and all those other idiots (except Breaker) from your first movie? Good. Leaving out Scarlett? Not so much. Like I said, I understand, because yes, I suppose having her and Snakes carry the franchise over and over and over again could get old (and it does in places in the canon, believe it or not), but...this is Scarlett we're talking about, man. Come on. Give us some of that counter-intel agent next time, maybe? Come to your senses, folks, and bring Scarlett back. Give her a crossbow and a chip on her shoulder and let her loose in a platoon of snakeheads. You know you want to. If you can't get Rachel back due to Continuum (hooray for Continuum!), go ahead and recast. I'll allow it. (Even better, get Rachel in between seasons of Continuum, but don't touch Continuum, okay? It's awesome!) But you so better not have killed her, because that? Well, not cool, man. Not cool on so many levels. Also, that would likely push Snakes over the edge, and would you really want that? No. No, I didn't think so.

The lack of all the other Joes, too: on that same note, though, really? No one but Snakes and Jinx answer Lady Jaye's call? Seriously? What happened to everyone else? There's no possible way they all were killed. Throw at least some explanation at us, please.

Cobra Commander just dumping Destro: I liked this, as it was very in character for the snake, but it seemed sudden and not explained at all for anyone not familiar with the Joe world/within this movie universe. Not showing what might have happened to Destro, though? Smart move. We know he has to come back and cause trouble somehow.

Storm Shadow's return: in that same vein, though, how exactly did Storm Shadow live? Didn't you stab him and throw him in the depths of the ocean in the last movie? Now, I understand he's come back from the "dead" countless times in his "life," but to just bring him back with no explanation whatsoever is lazy storytelling, in my humble opinion. Granted, I'm not sure you needed much, but you needed something. The little intro in the beginning told us that he and Zartan "were still at large," but that's a bit thin, don't you think? Still, he's back, so I can live with it. Just...weak. But Arashikage clan are pretty much immortal, so... *shrug*

The Arishakage Insignia: okay, so we all know Storm Shadow has his tat, and putting it on the swords and such is fine, but putting it on everything those boys touch? A bit much, no?

Finally, the cliff fight. Lovely action! But thank Spirit I didn't see this in 3D. Talk about a nasty headache! And I heard this was supposed to mirror issue #21's silent rescue? Well, it was silent, but I found the fight in the Pit in the first movie much more similar. But that's serious nitpicking, and it's open to interpretation, I suppose. Still, it was a bit over the top, even for Jinx and Snakes. But only a bit. ;)

And that is that, as they say. Overall, for a big, dumb, shoot-em-up movie, this one was okay. But it was only okay. It wasn't stellar. But though huge action movies can be stellar, G.I. Joe historically has not been of that ilk, and I'm okay with that. I'm off for now. Until next time, YO JOE!